Speakers at the launch recognised the network as a critical platform to spur inclusive development by harnessing leadership roles of African women.

The African Women Leaders Network (AWLN) launched its Malawian Chapter in Lilongwe on 2 March 2020 under the theme: Intergenerational leadership: Malawian Women Working Together for the Malawi we want.

In attendance were over 350 women, men and youth. These women were drawn from various sectors and groups such as Civil Society Organisations (CSOs), Youth networks Private Sector entities, , women in business including entrepreneurs, Parliament, local councils, political parties, academic institutions and students, women living in rural areas, Government Ministries, departments and agencies,  UN Agencies and Development partners, among others.

Prior to the launch, UN Women in collaboration with Ministry of Gender, Children Disability and Social Welfare, engaged various stakeholders and put in place a national taskforce that facilitated preparations for the launch. Critical as well was the involvement of key development partners such as the German Embassy/Federal Republic of German (Malawi Foreign office), The Royal Norwegian Embassy, and the Embassy of Ireland Malawi. In consolidating the aim of AWLN, the African Union was also involved in linking the AWLN mission to the African Union Agenda 2063.

The common thread message of the speeches was the recognition of ALWN as a critical platform to spur inclusive development by harnessing leadership roles of African women. AWLN was recognized as an opportunity for building a great legacy in as far advancing Gender Equality and Women Empowerment is concerned.

During the launch, a Panel discussion was held. This involved women representing 3 key generations (i.e. from before the Beijing Declaration and Platform and afterwards in 1995; from 1996 to 2005, from 2006 to date) in symbolising the nexus between generational needs and the need for intergenerational leadership in advancing inclusive development and gender equality and women empowerment. Key conclusions from the dialogue were:

Key next steps include the establishment of the National Steering committee; development of a consolidated workplan for the AWLN Malawi Chapter to provide direction of post launch activities and cascading the National Chapter to the district and community levels to ensure all women at all levels participate in the AWLN.

AWLN has also created a vibrant Young Feminist Movement that is carrying out nationwide advocacy on women’s human rights especially on ending all forms of violence against women and girls. The young feminist network is also bridging the inter-generational gap, with their voice and agency contributing to the fight against gender-based violence and the promotion of women’s rights. 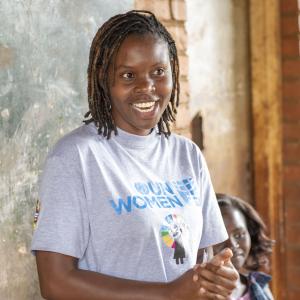