All allegations of misconduct by security forces should be investigated in a prompt, thorough, independent and impartial manner.

Geneva: We are very concerned by an increase in violent protests across Malawi, and the lack of a meaningful dialogue to halt the mounting tensions in the country.

Demonstrations started in the aftermath of the 21 May presidential elections, after some groups disputed the results. They subsequently spread as protesters also began airing economic and social grievances.

While initially peaceful, in recent weeks, some of the protests have become increasingly violent and have sometimes been met with excessive use of force. In some instances, security forces have resorted to the pre-emptive use of tear gas prior to the start of demonstrations. One demonstrator reportedly died after being arrested and beaten by Malawi Defence Forces, and another is in critical condition after being shot by live ammunition, reportedly by police forces.

A number of protesters have also been acting increasingly violently, and on Tuesday, a police officer was stoned to death during a spontaneous demonstration. We have also received reports of protesters looting shops and attacking Government buildings.

We remind the Malawian authorities of their obligation to respect the rights of freedom of expression and peaceful assembly, and to distinguish between violent actors and peaceful demonstrators. We urge demonstrators to express their grievances peacefully, without resorting to violence.

We also remind the authorities that the use of force during demonstrations should only be applied in exceptional circumstances, in accordance with applicable international human rights norms and standards, including the principles of legality, necessity and proportionality. In the case of violent demonstrations, law enforcement officials may use firearms only when less dangerous means are not practicable and only to the minimum extent necessary. In any event, intentional lethal force with firearms by law enforcement officials is prohibited, except as a last resort to protect against an imminent threat of death or serious injury.

All allegations of misconduct by security forces, including those resulting in death or injury, should be investigated in a prompt, thorough, independent and impartial manner.

We urge the Government and other relevant actors to urgently engage in a genuine and meaningful dialogue to address the political, social and economic grievances of the population, and reduce tensions. Otherwise, there is a serious risk the situation will spiral out of control. 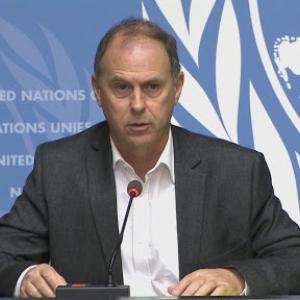